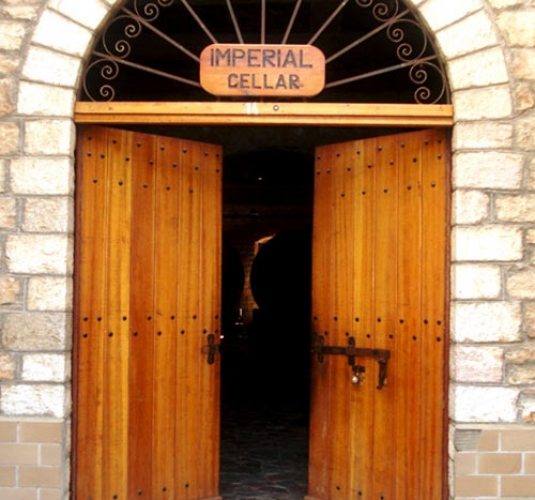 ellar No. 10 is one of the oldest buildings of ACHAIA CLAUSS and is located approximately in the centre of the settlement. Its peculiarity lies in the fact that some of the barrels it houses, containing Mavrodaphne, have been dedicated by Gustav Clauss and his successors to personalities of the ecclesiastical, political, artistic and intellectual world that have visited the winery. This tradition, still continuing to this day, dates back to the visit of Empress Elizabeth of Austria-Hungary to Gutland, in 1885, in honour of which Gustav Clauss gave the name “Imperial Cellar” to this cellar.

Carrying the aura of imperial presence itself within it, the “Imperial Cellar” hosts a total of 167 Mavrodaphne barrels, 30 of which are dedicated and 4 have representations from Greek Mythology.

and b) Hans Ehrenstrale, in December 2003

and b) Dariel Alarcon Ramirez, or “Benigno”, in November 2002

BARRELS WITH REPRESENTATIONS FROM GREEK MYTHOLOGY

1. Representation of the myth of god Dionysus and the Tyrrhenian pirates, crafted by the sculptor Nikolaos Stefanidis in 1967.

2. Representation of Hercules receiving a treat by goddess Athena, crafted by the sculptor Nikolaos Stefanidis in 1968.

3. Representation of Dionysus receiving a treat by his wife Ariadne, by sculptor Nikolaos Stefanidis in 1969.

4. Representation of Satyrs treading grapes, crafted by an unknown sculptor in Aegio.

* The above study was prepared as part of the survey conducted by Mrs Rodoula-Koumaris Stathakis on the handmade barrels of ACHAIA CLAUSS, which was released as a book in 2011 with the title «“Achaia” The winemaking company and its handmade barrels».